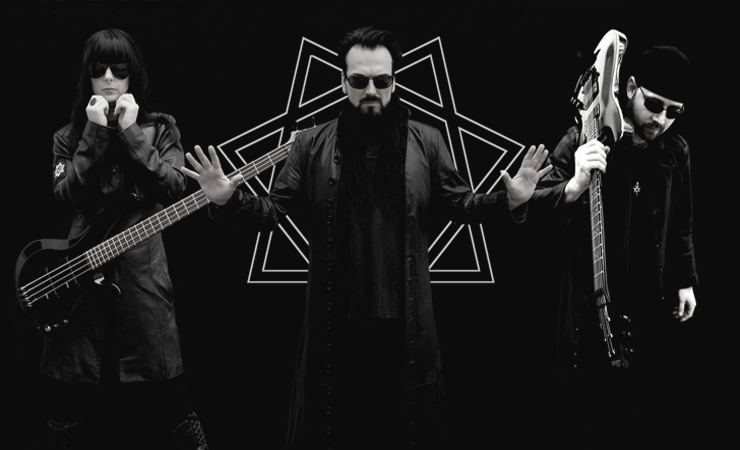 “She calls us from the Equinox… open the way… open this ride… a procession of laughter and fallen sons will be the miracle of incarnation of the sun”.

“and she closes her eyes and spreads her arms and she falls on her knees… someday, one day I wash her sadness away” (Someday)

Words burning into memory, cushioned in music affecting stimulation on a deeper level. From the first time of being exposed to it, Lib. I convinces immediately and without constraint. Perhaps because so much of it – despite being brand new material – does sound rather familiar? Void of musical experimentation, what reaches our ears is pure, honest Gothic Rock. The album fits perfectly, from the first second until the last. Whether the inclination is to get carried away by impulsive melodies or to drift away with eyes closed – Lib. I manages to accommodate all preference and mood. Those who had an affinity for Garden Of Delight will find themselves at home with the Merciful Nuns. And so it comes as little surprise that the first edition of the album, strictly limited to 1999 units, is virtually sold out completely a week before its official release, entering the Infrarot charts straight at number 1. The first gigs are confirmed. It is most refreshing to discover such treasures in the current climate of widespread dark-musical trivia. Marking the release of “Lib. I” here is the first interview with Artaud Seth exclusively for the German Lodge:

Hello Artaud, your new album LIB. 1 with the MERCIFUL NUNS is released today. I presume you’re feeling quite good within yourself! Artaud: Correct. It is simply a good feeling and it fills me with great pride to have such success with a Retro-Goth album. I must admit, it exceeds my expectations.

Number 1 with InfraROT? Artaud: For example; and the abundance of support from all of you out there. That is very special for me. “Lib. 1” originates in a whim of mine to create something which would return me personally to a time when I discovered my passion for music. The fact that so many appear to accompany me on this path, whether to re-live it or experience it anew, is something, like I said before, that fills me with great pride.

Many of your fans celebrate the MERCIFUL NUNS already as the new incarnation of GOD. It appears almost impossible to escape the eternal reference to your past. Artaud: GOD is an inseparable part of me, to which I owe so much. Of course, parallels are inevitable since by and large the same producer, songwriter and singer can be found behind both projects. But the basic philosophy is different. Where GOD were more bombastic, perhaps almost excessively so, the NUNS’ songs in contrast focus more on the fundamental aspects. From a production/technical point of view my aim was to generate a fuller and more modern sound combined with typical elements of the latter days of JOY DIVISION. Furthermore strong, solid and unfussy drums and distinct hall effects, a deep bass coupled with fleeting guitars; plus I wanted to have enough room for my vocals. To my mind, I seem to have achieved that rather well.

You consider the Merciful Nuns as “Pure Retro Goth” and refute the intention to create something new with the band. Why have you decided to mould the Merciful Nuns as a tribute to the Gothic scene of the 80’s and early 90’s? Artaud: Because no one else is going to do it and because I just love that sound. Besides, I don’t want to wait for another 20 years until some day the Sisters may decide to make another album. Probably I’d be disappointed anyway by the result and hence I decided to write my own Retro-Goth album. And who could do a better job than me anyway? I can’t think of anyone. The Merry Thoughts maybe, but they are no longer in existence.

LIB. 1 reminds me very much of the earlier times of GOD, even though the sound is more Saturnine, darker and the musical backdrop not so overloaded. Would you agree? Artaud: I find your assessment agreeable.

Before I venture to ask you about the subject matter of LIB. 1 and the term NUNHOOD, I am interested in whether this is a solo project of yours or an actual band with familiar or new faces? Artaud: I wrote, recorded and mixed the album by myself inside just three weeks; a potential live line-up will be revealed at a later date. There will be a few surprises, that much I can promise.

Adrian Hates? Artaud: Yeah sure. And while you’re at it: neither Tom O’Connell, just in case you were going to mention him as well. Let’s just wait and see, shall we?

Do you still follow the fortunes of your former comrades-in-arms? Artaud: To some extend yes; recently I’ve been in touch quite frequently with Adrian. It’s quite astounding to see which path he has embarked upon with Diary Of Dreams. Even though it is not my cup of tea from a sound perspective, and I’m sure he’d say the same about me, nevertheless it’s really well done.

Garden of Delight were founded in 1991 and in view of the 20th anniversary looming the question arises whether you have any specific plans for 2011? Artaud: There are no plans. My focus is fixed on the Nuns. GOD is history.

Following two decades of activity in the Gothic scene, how would you summarise your conclusions? Artaud: After a very exciting time at the onset, marked out by innovation and a certain atmosphere of departure, followed by a period of artistic and financial self-actualisation we have once again returned to the beginning. That is applicable for almost all musicians. Actually a rather tantalising time!

Now let’s address the aforementioned subject matter. Which particular subjects have inspired you with regards to the lyrics? Do you consider “Lib. 1” as a song collection or a conceptual album? Artaud: Both actually. The lyrics work well on their own and also in conjunction with the album’s other songs. Together the lyrics form a statute of law, my own personal “Lib. 1”.

NUN and NUNHOOD, how would you define either? I would imagine that many don’t even as much as suspect that NUN has no relevance to nuns but is in fact an allusion to an Ancient Egyptian Divinity. What significance does it have for the MERCIFUL NUNS and how are we to interpret it? Artaud: It is indeed a band name which can be interpreted in various ways. Primarily speaking I found the concept of a merciful Order of nuns as a remnant of one of the 80’s best bands: the Sisters Of Mercy rather appropriate for “Lib. 1”. As a secondary aspect it reflects my affinity with pre-Christian mythology, especially Egyptian. The ambiguity of the name NUN shall therefore be reflected in the NUNHOOD concept – as an amalgamation of like-minded seekers.

This gives the impression that the NUNHOOD concept is somehow related to the Fraternity mind-set, perhaps even Freemasonry? Artaud: Quite possible. Like I said, the NUNHOOD goal is the pooling of you out there and for that purpose we endeavour to establish more and more Lodges in Goth-related countries. I’ll be in close contact with these Lodges and will regularly do something special in the respective countries. This may take the form of an interview as we are doing just now, or perhaps a meeting with us. In the foreseeable future and as soon as time will permit me, a virtual library will be incepted under www.grandlodge.de. Therein I want to offer insight into the subject matter of my lyrics. Only members of NUNHOOD shall be invited to access and enter the www.grandlodge.de. In a sense they become Initiates if they so desire. To answer your question regarding a possible relation to Freemasonry: There is indeed a connection but I wouldn’t attribute too much significance to it; my primary interest in Freemasonry is limited to its visual and coded concepts, no more than that.

The bonus track on the new CD, LIBER AL VEL LEGIS denotes a text by Aleister Crowley. It’s the 1st volume of Crowley’s “The Equinox”, conspicuously also the title of a track on the album. Upon further examination of the opus one finds further correlations amongst terms like HADIT and AEON. Are such references deliberate? Artaud: Even though we have here the primary inspiration for “Lib. 1”, Crowley as an occultist or author holds little interest for me. Nevertheless, this man significantly affected his environment and indeed still does today for and in many magically inspired people. I am much more interested in the sources for HIS inspiration, how HE managed to exert such influence and unto whom as well as of course what influenced HIM. I gather that one soon arrives at Egyptian and Greek mysticism as the fundamental basis behind his Thelema. Golden Dawn, Freemasonry, Rosicrucianism were further subjects which seeped into “Lib. 1”. Queue Israel Regardie. Inspiration from “The Magical System of the Golden Dawn” in its original form (2 volumes) from an English Masonic Lodge and which was presented to me by a Masonic Past Master. A principle inspiration to “Lib. 1” e.g. in Temple Of Hadit.

Only 1999 copies of “Lib. 1” personally certified by yourself are in existence; surely not enough to satisfy the demand of your fans? Artaud: A few weeks ago I thought it would suffice, but it seems I was wrong. Tough in this way the first 2000 copies retain something special about them. The album will be released soon in standard format. So let’s wait and see how everything develops. I am, after all, now boss of my own label.

What are your expectations for it? Weren’t you satisfied with TRISOL anymore? Artaud: I was satisfied but had reached a point in my life where I wanted to take charge of it myself. I have pondered long and hard whether or not to re-sign with TRISOL. In the end I made a decision in favour of following my own vision. Time will prove me right, in this I am sure by now.

Do you want to give other bands a chance on your label? Artaud: If they are compatible with my label philosophy then why not?

What will be of interest to most followers of the new NUNHOOD movement, Artaud, are there any plans for concerts in the pipeline? Artaud: Indeed there are. Check in here every now and then or visit our page www.mercifulnuns.com.

Many thanks for the interview! Artaud: The thanks is all mine.