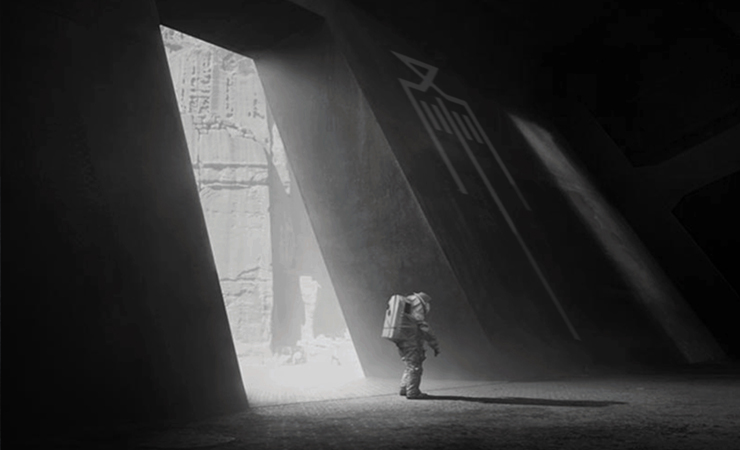 Every man and every woman is a star

“It somehow feels like provenance to do this precisely now at this moment in time. The questions are slowly compacting into an answer. Thelema VIII is a personal milestone for me in terms of comprehension.” Artaud

And true to form Artaud has once again designed the entire artwork; the front cover showing three Thelematic seals next to the Greek letter for “Thelema”. The cover of the single “All-seeing eye” features the symbol of the dystopic society on Thelema VIII.

Hence what remains is the question concerning the image of the solitary astronaut and its significance for the new creation. I found the following citation from him:

“I am always searching for images that combine the past and the future. I believe in cycles, the perpetual return of what has gone before and I can see parallels between the high cultures of antiquity and futuristic societies. I believe in unknown cultures, from so far back in time that there are no more discernible traces from them in the classic sense; highly advanced cultures in antiquity, perhaps even older still.”

In order to delve deeper into the mysteries surrounding these advanced cultures, the new album “Thelema VIII” and its featured dystopic society, Aleister Crowley’s influence on him, us and indeed the world of music in general, as well as the new single “All-seeing Eye” including its accompanying video, Sonic Seducer felt compelled to request an interview.

How should I envisage a “typical” day in the studio? Artaud: More regulated than perhaps one might think. Even though self-discipline is not necessarily one of my strong suits, nonetheless everything is pretty much well organized and regulated these days. To write and produce an album is simply an enormous undertaking and hence I have little choice, albeit against my natural tendency, but to pull myself together and persevere. More often than not I find myself sitting in the studio from around midday and rarely leave it again before 5am. This routine can easily last for a few months.

Considering your output in terms of releases, would you agree that this can’t be a very healthy lifestyle? Artaud: Probably a true statement; though more than 5 hours sleep are a rare luxury for me anyway. However, I have a very good physical constitution despite my biblical age.

How old are you actually? One has always the impression you have been here forever. Artaud: I embarked on my 3001st year in August 1999 AD. Since then I have stopped counting.

Can you tell me something about your Modus Operandi? Artaud: Mostly I write, arrange and produce the songs by myself. Jawa and Jón add their bass and guitar parts later on. The lyrics, concept and even the layout are usually already set, or at the very least they are available in fragmentary form. This is the only way I can stay focused on a particular topic without digressing. This is important to me.

Why have you specifically arranged the beginning of “Dystopia” as a soundtrack? I think it’s a very good intro to the album from a musical perspective – is there perhaps another significance behind it? Artaud: You mean the first few seconds of the song? It is, if you like, a kind of introduction to the prevailing scenario on planet “Thelema VIII”. The population gathers at the central assembly point and honours its founder Rabelais. Here begins the journey into the depths of a dystopic society living on a distant exoplanet according to Thelematic principles.

Who was or is Rabelais? Artaud: François Rabelais was a French writer and lateral thinker who wanted to establish a new form of society at the beginning of the 16th century – the Abbey of Thelema; where the people were supposed to live in complete freedom, guided by the single canon: “Do What Thou Wilt”. He is worshipped as the creator by the population on “Thelema VIII”. The British occultist Aleister Crowley has taken this guideline for cohabitation and expanded it later on, introducing it into his Thelema temple.

On YouTube we can see you exploring the former domicile and cult site “Thelema” of Crowley in Cefalù, Sicily. Your travels are often cited as sources for inspiration for you, how important are such actual event locations? Artaud: Very important. These locations grant me the absolution to assume the role of an initiated chronologist.

What exactly is it about this distant exoplanetary society that can be called “Dystopic”? Artaud: Everything. This concept of an open and liberal society oppresses and exploits its citizens.

How important is the concept of freedom on “Thelema”? Artaud: Freedom is the central theme on “Thelema VIII”. Freedom of the individual, in particular freedom for woman, living out one’s individual inclinations and wishes; to satisfy the self and indeed the original goal of existence: personal fulfilment. This may sound abstract when taken in context to the fictitious society on “Thelema VIII”, yet nonetheless quite easily transposed onto our society in the present. We are here ALL but once! EVERYONE has but one chance for a beautiful and fulfilling life!

“Every woman and every man is a star”, if I may quote you here? Artaud: Precisely! This citation is not mine but Crowley’s, in the context of what I want to express an ideal fit nevertheless.

What influence would say have the advanced cultures of antiquity – repeatedly appearing in your lyrics – on the exoplanetary life, if any? Or should that rather be the influence of those exoplanetary inhabitants on us? Artaud: Ancient advanced cultures like the Sumerians, Egyptians, Maya and their adoration for divinities from “beyond” always appear to me as an effigy of the future. By now I have arrived at the inescapable conviction that we have already been visited by these so called advanced cultures. Nowadays these visitors are worshipped as God or Gods by us.

Could you please tell us a bit more about this exoplanetary world? Artaud: I could now tell you everything and nothing. After all I have envisioned it. Perhaps it would prudent to state here that we are traversing terrain of fiction. This planet is not real. It is an effigy of our own society in light of a past shaped by outside influences. And even this claim is essentially nothing more than conjecture; albeit rather plausible and more than just a statement of possibility.

The pre-released single “All-seeing Eye” is for me personally – along with the title track “Thelema” – the catchiest tune on the album. Is that why you chose this particular track? Or does it have a particular bearing on the master concept? Artaud: Both. The song has a quite simple structure. To be honest this song almost came too easy to me and hence I pondered for quite some time whether it would actually do the album’s atmosphere justice. In the end I’m glad having forced myself to include it on the album. By now I do consider “All-seeing Eye” as a real enrichment, felicitous and intelligent pop song.

Could you please elaborate on the symbol of this dystopic society, which adorns the cover of the single? Artaud: The symbol features a double “Victory” sign which I have crossed with the Greek word for “Will” (Thelema). Victory requires the Will.

Are you responsible for the album’s artwork? Artaud: Yes, just like with all MERCIFUL NUNS albums.

I have read somewhere that “Thelema VIII” was originally intended as a sequel to “Exosphere VI”. What are the common denominators you have seen in them and why have you ultimately dismissed the notion? Can you name a fundamental difference? Artaud: I have used similar synthesizers on “Exosphere”, which have once again been used extensively. The theme was also established within the depths of the cosmos, and the whole progressive process was comparable. Whilst writing the songs I found myself deviating from the parameters and hence “Thelema VIII” got its very own note. Even so, you can still draw certain parallels.

“Red Flame”, effectively concludes the first side of the long-player is another song I like very much – a classic up-beat Gothic Rock song. What is its significance with regards to the whole musical concept? Artaud: The insurgence on “Thelema VIII” begins with the general oppression of females and the rape of Elain – the chief protagonist – in particular. She prostitutes herself and thus takes her revenge on the men who wronged her. No need to go into further detail as it is all detailed in the lyrics.

“In Silence” sounds very much like a ceremony/mass, very arcane and atmospheric: Can you please reveal a little more about the line: “its 3am in my monochrome world/district 8 rebels again.”? Artaud: This song is from the perspective of a rebellious woman, the mood reveals despair, loneliness and the hopelessness of the situation in which the woman finds herself trapped. It could be Elain, but I’m not so sure.

“The Law”: “Do what thou wilt…” and “All the world is a stage” seems to be a curious yet fascinating Crowley-Shakespeare hybrid (Macbeth, after all, alludes to the end of the world as a stage). How do you see this? Artaud: Shakespeare doesn’t do it for me. His works are too British, too dramatic and quite often too boring in my view. “The Law” represents quite simply the basic formula for complete existence. “Do what thou wilt, that shall be your only law.”

What is the importance of the surreal-atmospheric pieces “The Aeons” and “L.V.X.”? Artaud: Both are my favourite songs on “Thelema VIII”. “L.V.X.” particularly is, to my mind, very felicitous indeed. A song can’t be much darker and morbid than this one. The lyrics are reminiscent of Baudelaire, Rimbaud or even William Blake.

The central pieces appear to be “All-seeing Eye” and the title track “Thelema” which concludes the album. Would you agree with this? Could you elaborate on the significance of both songs for the entire album? Artaud: Actually, there aren’t any so-called center pieces on “Thelema VIII”. Every song plays its own, unique part which is, after all, the whole point of a concept album. The final song “Thelema” stands for rebellion and insurgence. Or, put in a different way: it symbolizes the conquest of one’s own limitations within. Here too we call upon willpower. Conquer your fear. Resist, gather together and change the situation.

What is the significance of the background chants that close the album? Artaud: Aleister Crowley’s original voice concludes the album.

My sincerest thanks for this interview! Artaud: 93/93